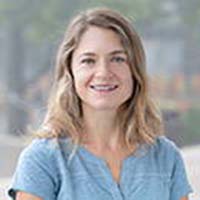 Holly Gibbs is a geographer who studies how and why people use land around the world, and the associated consequences for the environment and global carbon cycle. She was trained as a physical scientist and focuses on interdisciplinary, applied questions around human-environment interactions, globalization, environment, and policy. She heads a highly trained team of staff scientists, GIS analysts, cartographers, and student researchers who tackle interdisciplinary questions around Land Change Science.

Gibbs has developed novel methods that combine Big Data, spatial analysis, remote sensing imagery, and statistical modeling with ground-based information on social and biophysical conditions. She uses this framework to improve our understanding of the causes, patterns, and effects of land use change at the global scale, and particularly of tropical deforestation in Brazil and of cropland expansion in the United States.

Recently, Gibbs has focused on tracking the land sources for newly expanding croplands and how this is influenced by different policies. In particular, she has evaluated the outcomes of recent company-led efforts to reduce the deforestation caused by soybean and cattle pasture expansion in the Brazilian Amazon and beyond.

As public scrutiny and pressure from environmental organizations has increased over the last decade, the agricultural industry responded by making public commitments to avoid all links to deforestation. She was the first to assess what these promises mean on the ground by using econometrics, field surveys, and maps of thousands of properties linked to different companies.

Gibbs also works in the U.S. where she focuses on solutions for agricultural sustainability at local to national levels, and is particularly interested in the impact of federal policies on land and water resources.

Since beginning her career at UW-Madison in 2011, Gibbs has been the principal investigator (PI) and co-PI on grants which provided nearly $7 million in direct funding for her lab group. She has published in leading journals such as Science, Nature Climate Change, and the Proceedings of the National Academies of Science. Her papers have been cited more than 13,000 times.

Gibbs has led five press releases and routinely shares her results with the public through print, television and radio media outlets. She passionately embodies the Wisconsin Idea, and puts her scholarship into action through frequent expert consultations with policymakers, agricultural industry leaders, and environmental organizations.

In 2018, Gibbs was awarded a research fellowship by the Office of Economic Cooperation and Development for sabbatical research in New Zealand. Gibbs was the 2017 winner of the College of Letters and Sciences “Deans Award for Distinguished Faculty Achievement,” named for Phil Certain and Dean Gary Sander.

She previously received the Chancellors Chancellor’s Distinguished Teaching Award (2016) and the University Housing Honored Instructor Award (2015). In addition, she was the co-recipient of the Administrative Improvement Award (2016) for a student project.